About a year and half ago I bought a piece-of-crap box of parts from some guy in Connecticut. The price was way out of hand but the basics were there: '58 frame and chassis, '71 motor and tranny, misc garbage. I had big plans for the bike as it had beautiful lines. In my opinion the duo-glide, kick-only Harley frames are the best frames ever made: Low, clean, round swing arm, just beautiful. Come to think of it, Hydra-Glide front ends aren't too shabby either ;-o They kind of remind me of the trains built in the mid to late thirties. The very definition of art-deco, giving a glimpse into the flavor of a rapidly progressing, technology starved, industrialized America. While just a dream in a box, if not a deathtrap waiting to strike, this one was going to be a beauty. . .

Skip the stories jack, let me see it!

I called it a weekend at that point and left for the drive back to NYC.  This would turn out to be a weekly ritual.  Every Friday at 4, I'd cut out of work and drive or take the train down to Philly.  I'd put in 30 to 40 hours by Sunday night and drag my exhausted ass back home.  It's a two or three hour drive or a four hour train ride.  Man, work was going to be tough for the next couple of months.

That's it for this installment, this web page shit is a hassle. I've wasted the whole night already. See you in another six months. . . 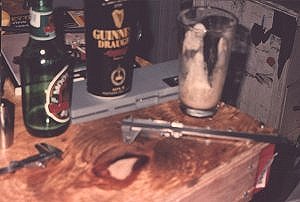