The Ride Home From Pauls

We left off along this tale that never ends somewhere about the time I was going down the road feeling good, if only a short respite from having failed myself in the boy scout department, at my buddy Paul's place on Sunday. While bummed that I'd be leaving my ride behind so soon after our short but glorious reunion, I conned myself (rationalized sounds so clinical) into thinking some good must come of it. Maybe I'd take another stab at keeping motorcycles off my mind for a few hours (impossible!) and work on getting my real life together until I get a ride back upstate -- at least one that will pay rent and buy bike parts and afford guitar strings and cover beer -- by maybe writing a resume and start looking for real paying work. I am quite skilled at motivating myself and making bold plans so long as there's no chance that I could those things immediately. Plan for tomorrow, until I get there, rinse, repeat.

I'll say that currently I don't believe there's a god. I am not certain that one couldn't exist, just don't have any evidence by this point. Of course, my conclusions are always subject to re-thinking and reconsideration. My thoughts on and experiences with such matters will mellow and cure with age perhaps leading me to a different conclusion. Not that you really needed to get such context within what you thought was supposed to be motorcycle-related: a tale about a day spent riding. But what does one likely do while riding but ponder such abstract astral matters? (Except when intruded upon by immediate physical reality issues such as someone trying to run you over or a flat tire) I wander and wonder about the nature of the world and my place in it - blow as tumbleweeds until the worms get their due - build as ants until the rains come - sleep all day as lions hunting only when hungry. . . dirt welcomes them all and doesn't ask their stories.

This and more the movingletters marquis on the front wall of my head where my eyes mosttimes look when they aren't looking out my eyes.

I awoke this bike-less Monday morning to a phone call from a friend I used to work with who long since became a head hunter. I can count on a call from him, with ever increasing urgency as the jobless months pile up, every few months. I answered the call to hear "Ready to get back to work?" -- perfectly on queue with my yester-born plans for today as if ( ) was looking out for me and giving me a little hand -- to which I replied "Absolutely!"

R: "When?"
J: "Today"
R: "Have a resume yet?"
J: "Nope"
R(without letting me even finish the sentence):"Gotta guy who's gonna write it for you. He awaits your call. I sent you an e-mail"
J: "No shit. Thanks." (potentially at one of the aforementioned evidence re-evaluation points?)

The cliche ball is rolling as is my re-enlistment proceeding.

Tuesday night finds me waiting for Paul to pick me up so we can head upstate. While three hours from the city, he likes to stay up there during the week sometimes to get some fresh air and sleep in the cool breeze instead of the sweltering city sticky. Over the last few years I have been making installments of "Jason's Picks" for him to listen to on that cool comfy bagger I was telling you about. There hasn't been a vault release in some time, and I figured it'd be a fitting token (however small) of my appreciation for him shuttling me about in the name of rescuing my bike. He knows, as I, the tragic destructive effects of being away from your bike for more than a few hours. Hmmmm, what to choose? Many of my favorites have been lost or pinched over the years, leaving the choices increasingly difficult. I ended up making a three CD set of 8-27-72 -- a show maybe considered sloppy but there's definitely something in the air as the minstrel jumps out of gate at the first opportunity only seconds into the first song with the vigor and impatience of a spooked thoroughbred that later settles down into ethereal and infinitely patient melodic meandering -- a show I have many memories of listening to while travelling down the road in rural upstate New York under moonlight with the headlights off and twinklebuzz in my brain. Even a couple shoot-em-up Polkas in the mix for good measure.

I quickly put a new coil on my bike, packed it up, and went to bed after a few games of pool downstairs. Big day tomorrow! Paul told me, in a sympathetic tone, that it'd probably rain the next day. I assured him that there probably couldn't be any weather that'd wreck my day riding.

He left for work sometime around six, and I only know because he said that's when he'd be leaving, without making a sound. I got up sharpy at seven-thirty and jumped out of bed. Funny how I can't seem to wake up at home, yet place a day of riding before me and I'm up like a wall-streeter rushing to catch the Metro-North in Greenwich at some ungodly dark hour. Could this somehow be my job? Could there be a market for ramshackle riding journalism (loosely used with deference to the genuine article)? I made a cup of coffee, grabbed a brownie I had made that weekend (waste-not, want-not), and walked out onto the porch to look about and prepare for the day. I locked up the house, put on my rain gear, and headed out.

In a ray of clarity, and considering I might not have too many of these carefree days left in my immediate future, I randomly chose local roads and other roundaboutroutes on my way. I took the river road down the East Branch of the Upper Delaware until I reached the covered bridge at Downsville. The explosive greenery and crops and ivy smelled so good. The air was so thick with life (and water). I smiled to myself and mosied on. The covered bridge is constructed entirely of oiled rough-milled timber. It has that distinctive smell of old garages and workshops which I love. Most of the bikes I own have been across that bridge - or at least I'm working on it without wearing out my welcome at Paul's. Right of passage for machines who are no less tools and craft of men than old-timey wood bridges.

I took 206 through nice hilly sweepers that my bike loves so much into Roscoe where I nod to the renowned diner and get some gas. To hell with route 17 today as I turn down an unmarked road that appears generally to head in the right direction. Eventually I'll run into the Delaware river and follow it down into Port Jervis. Went through a bunch of little towns with names Callicoon Center, Hankins, Edenville and such. You know you're in good territory when the signage directs you by town names and not numbers. If you don't know 'em, you must have no business there or are a traveller to whom it doesn't matter anyway. I eventually found my way to route 97 along the river, where there is a little stretch that'd make you swear you were in the Italian Alps. Check it out: 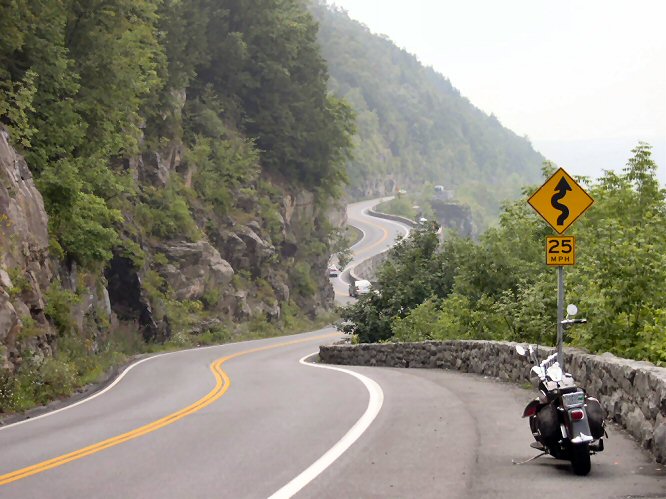 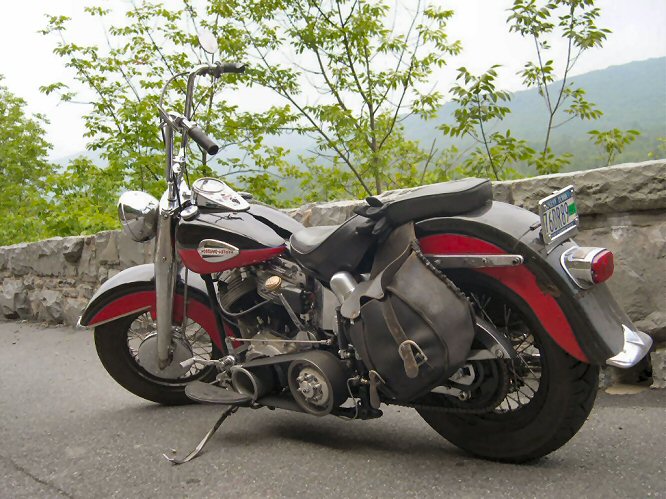 I guess this marks the picture section. Actually, I had intended to just post the pictures and not make an epic out of this. Oh well. I took a few pictures while riding in hopes of honing my craft to the level of my mentors in the craft: Rev Tramp and (lately) John from Cali. Check 'em out: 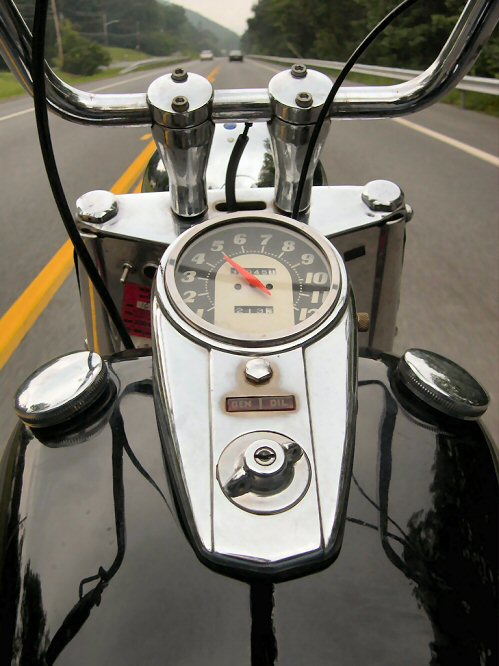 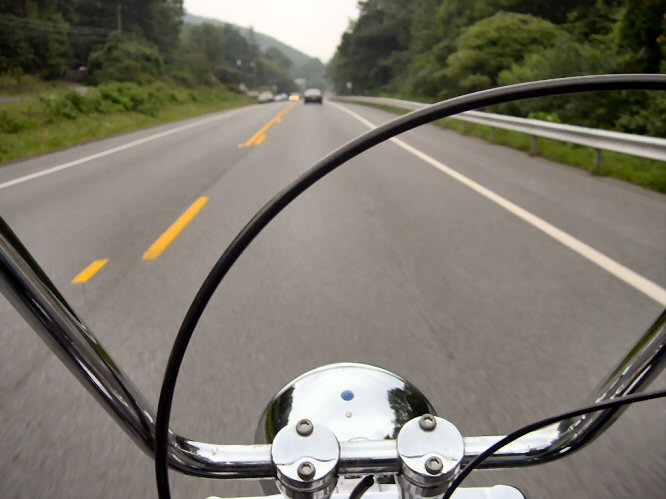 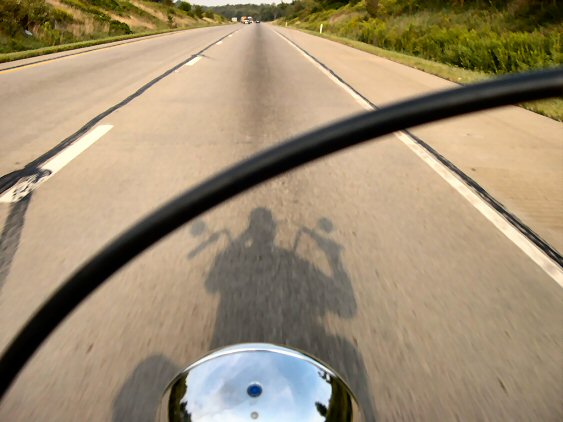 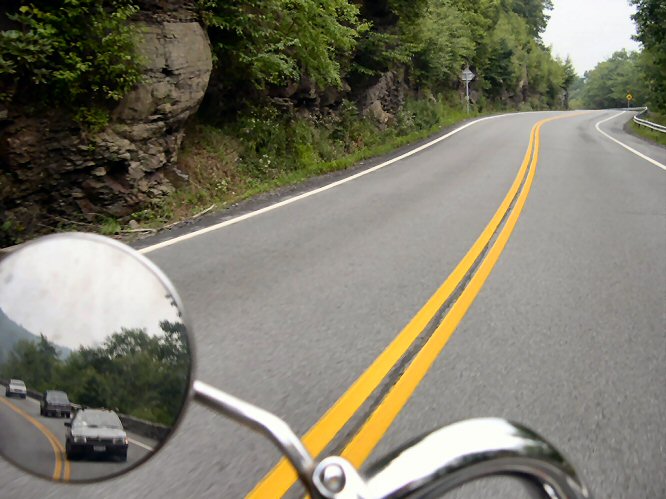 After my little photo session, I stopped in a small country diner for lunch. It was perfect: nice folks who all said hello when I walked in, good service, good food. No point describing the obvious any further. 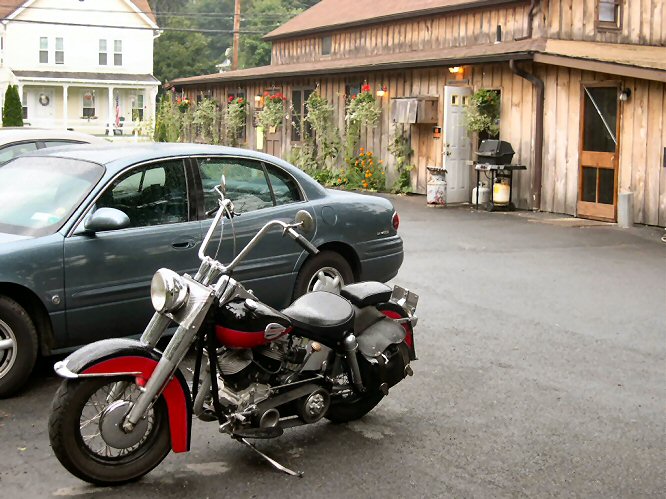 Up until then, I hadn't really had much but drizzle on me. I even had some peaking episodes of sunshine that seemed perfectly synchronized with my singsong thoughts. But, as was inevitable, the rains finally came. Not just any rains, torrential flashfloodwipeyouofftheroad rains. Didn't faze me. I pulled into a gas station under an awning and decided to have a cup of coffee and another brownie (mmmm, those brownies are good) in the name of relaxation. I smiled and said hello to the mostly Hasidic clientele, most of whom did not reply in kind. I got one smile in return. I don't really know much about the Hasidim beside what I read and see in Brooklyn - much of it negative. Perhaps they are unaccustomed to goyim on motorcycles smelling like wet dog giving friendly greetings. Perhaps they have disdain for me. I did notice that they don't really greet each other either. My style remains unaltered as I greet all passers while watching the rain and sipping my coffee. 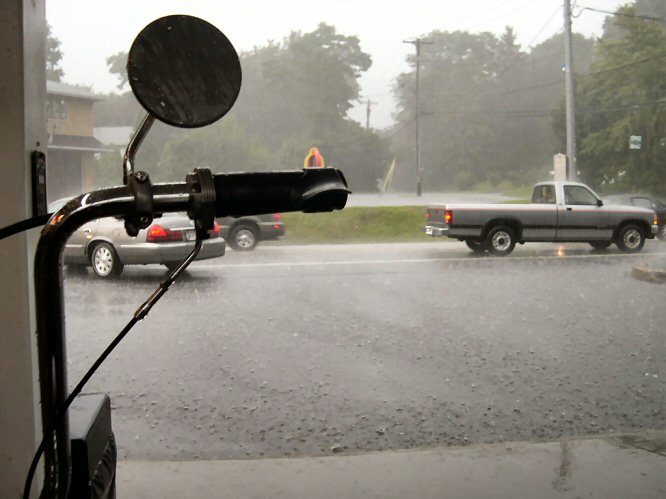 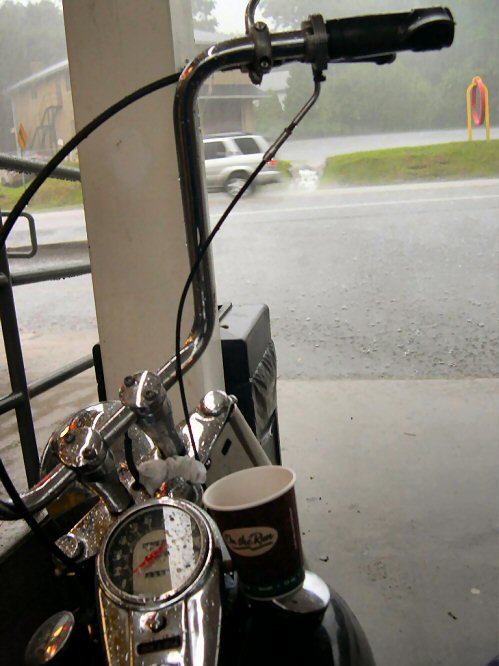 The rain never stopped (nor did the music in my head) for the rest of the journey. Crazed mayhem New Yorkers and New Jerseyans in a mad homicidal rush down route 4 into the George Washington bridge. I stayed alive as best I could until I reached my hidden lair in Brooklyn.

One for the troops 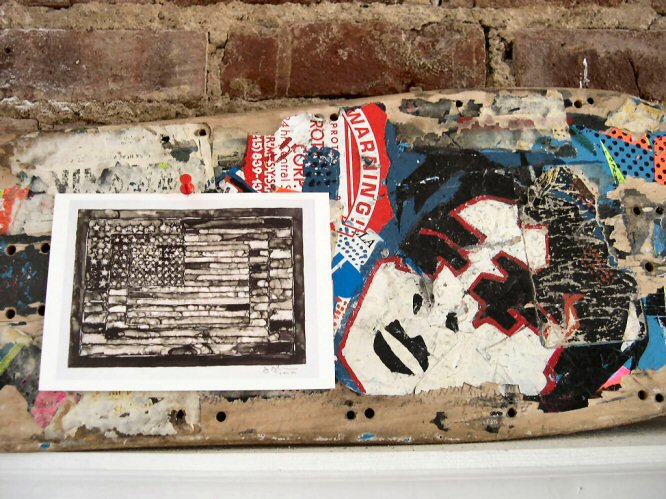