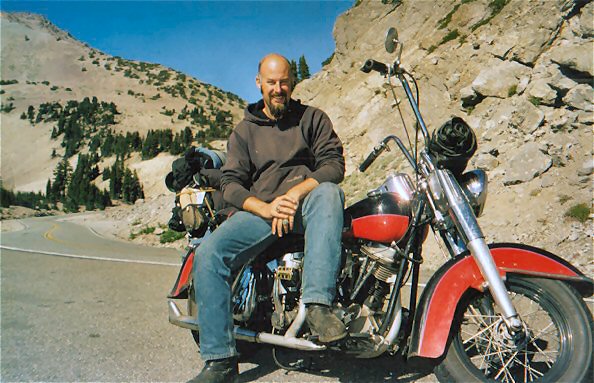 Two months, roughly eleven thousand miles, three or four hundred beers, and many new friends later. . . I came in from the cold. I paid the price on the last leg of my trip. It was around forty degrees Fahrenheit and I pulled every last ace from my sleeve in an effort to stay warm. Big deal. The Sun God was kind enough to provide me with balmy days up until the very end. Hell, I got to ride through Kentucky, West Virginia, and Virginia in eighty-degree weather in a sweatshirt, at the end of October no less. So many beautiful roads framed in bubbles of blaze orange and blood red and glowing yellow were put before me as I meandered through tiny little coal towns on the way back to my home coast. I was intimidated by the powerful beauty and richness before me. So much so that the thought of trying to capture something of it seemed a timid joke. I reverently kept my camera in my saddlebag. My natural inclination to want to borrow a snatch of this to share with my friends or to rekindle my own memories later in the bogs of grey winter were tugging at me. As I often do in times and places of great significance, I decided that this was intended for eyes and memories only. How lucky was I to have caught this perfect curl of Indian summer?

I had been suffering from homesickness and flu off and on for a couple weeks. I spent a few days laid up in highway-side motels flipping channels until my thumb was aching and my eyes were stunned, head spinning from cold medicine, the drone of trucks going by, the insidious creep of inevitable realities into my sore and overloaded head, my broke and tired ass begging me to call an end to this epic journey.

I bided my time. I refused to close the book on the possibility of further adventures. I refused to end the tale without wrapping up all the plot lines. I refused to break the continuity afforded by walking slowly along through familiar territory rather than to run, all the while pondering the sparks of tales begun in the preceding weeks, reflecting on what it means to be home and whether home even exists, whether in the mind or on maps. No cliffhangers, at least of my own doing, would suffice as a fitting end. No fear or comfort driven yearning should rob me of my time for contemplation and completion.

I was rewarded for sticking to the path originally set out upon. Even if that path was never declared. It was revealed to me slowly over the course of my travels. As the veils of confusion were lifted, revealing new ones, I learned a few things:

Great people inhabit this country. People of warmth and generosity. People of curiosity who would rather take a chance on something or someone new and different than close the door on possibility. People of pride who want to share that which they are proud of, no matter how humble it may seem to them. They share their pride in their family, in their hometown, in their achievements, in their history. While these characteristics are sometimes damaged by past difficulties or situations, I believe they are innate, if dormant, in everyone. Sometimes it only takes a little prodding or inspiration to rekindle.

People have the same desires and passions the world over. Everywhere I have travelled I have encountered folks with the same interests. People want a safe home for themselves, their family, and their friends. They want security for the homes, lives, and property they have built. They fear those that would threaten that, be they foreigners, warmongers, their government, or even local law enforcement. Many are still willing to die or suffer incarceration for this belief. I believe this is what is meant by the term "frontier spirit". I believe it is still alive in this country, if greatly weakened by subtle but powerful forms of manipulation. One of the most powerful and prevalent of these forms is the sustenance and perpetuation of racism and prejudice. So long as people believe that someone else is responsible for their condition, they will fail to change it.

This world is a delicate and complex balance of beauty and ugliness. You can build a life wherein you encounter more of one than the other based on your actions, but the existence of both remains. On my trip I encountered the heights of beauty and the depths of ugliness. In nature, culture, people, and even my own thoughts. This is only fitting and was not unexpected. Rather, I feel lucky to have had a true experience and not one colored by artificial bliss.

You may have noticed that I have not mentioned my motorcycle thus far.

My philosophy on bikes, their owners, and their purpose has changed during the time I've been into bikes. If you count bicycles, that would make 28 years. A short time compared to some bike freaks I know or have met on this trip. My commitment is total. My commitment is pure. When asked what kind of bikes I like I usually answer "Those with two wheels". While this may seem trite or evasive, it describes my taste accurately.

Initially, my interest lay in the machine as an object. My efforts and time were spent creating the perfect machine. Perfect in line and form, perfect in mechanical condition, perfect in functionality. This aim is enough to sustain the obsession, and is reason enough to pursue and continue building bikes. If my interest stopped there I'd probably still be building bikes. If your interest stops there, there is nothing wrong with that.

Later, I became interested in what this machine could do for me. It wasn't enough to have created and maintained a perfect object. It now needed to be able to take me to new places , into new situations, to meet new people, if not effortlessly, at least painlessly. My foundation remains the home-built bike as object, only now this foundation supports another purpose: ticket to freedom and exploration. I'm struggling to find the words to shed light on the relationship between these purposes. While any commercially produced vehicle could have taken my on this last journey, it would not have been the same. A large part of my satisfaction was derived from having taken this trip on a machine that I alone built.

So, my bike was a crucial and inseparable component of the trip, but not the focus. It might not look like much, those handing out labels might not consider it a chopper or custom or whatever passes for such these days, and it may not turn heads on the road. None of this matters. The satisfaction in, and appreciation of, the machine is my own. I didn't show it off. I didn't pose on it. That would be a perversion of our relationship. It serves me, not the converse. Mind you, my efforts in creating and maintaining it might appear as such, but this is not the case. These efforts, while staggering by anyone's standards, are really about me putting money in the bank for later enjoyment. Who wants a problem that could have easily been solved by maintenance or better engineering popping up on a warm summer night on the road, in a new town, with new friends, while out for a sunset ride or a beer? Not me. That would reflect badly on the machine, and on me, besides intruding on the real purpose of travel.

The truest sign of success for me, where it comes to building a bike, is to have it perform so flawlessly and loyally that I almost forget it's there. I can take in everything around me unfettered by worry or consciousness of anything but that which I see or ponder. At that point the bike's essence transcends object, purpose, and the culmination of tangible efforts. At that point it becomes a silent spirit that serves me selflessly. Despite my description, there is really no duality here at all. This spirit that serves me is really only an incarnation of self composed of my previous efforts.

All this is not to say that I didn't encounter problems on the road. Of course I did. None of them were showstoppers though. None of them caused me the kind of worry that can ruin an otherwise perfect experience. None of them were mysterious or difficult to discern. This freedom is afforded anyone who single-handedly builds an entire machine. If there is no assembly that you did not build yourself, than there is nothing that can evade your understanding. Problems are reduced simply to whether you have the tools to remedy what has occurred. You alone are responsible for your success.

You alone are also responsible for your failure.

This the real test.

This is freedom tempered by responsibility.

Just when you thought I wasn't going anywhere with this (and I was starting to wonder too). . .

I believe this tenet (tempered freedom) is a core concept in the viability and success of a society. It directly contradicts the mindset of those that would blame others for their condition or seek others to take responsibility for their shortcomings and difficulties.

. . . the themes and thoughts and considerations such as these continue to spin my brain as I approach the NYC skyline on this chilly Thursday night. I subconsciously resume my city stance and habits. I am driving quickly, but precisely. I am hyper-aware. I am sitting up taller. I am excited yet nervous about arriving home. I smile and gab with the tollbooth attendant where I pay the turnpike toll. I tell her it's damned good to be home. She smiles genuinely and welcomes me.

Pride in home is universal.

I weave surgically through the traffic leading up to the Holland Tunnel. I throw this bike around like it's a toy despite it's being packed to the gills with camping gear, clothes, tools, stuff I collected in my travels. I split lanes with nary a centimeter on either side. I don't do this aggressively. I do this skillfully. I do this respectfully. I am drawing upon some deeper understanding and skill culminated from years of riding in the city. It causes me no tension. It makes me smile. I've added a new facet to my riding and travels without having lost or become rusty in that which I already possessed.

I slip from the Newark airport to the gate of the Holland Tunnel in what seems like minutes. Total fluidity. I tried, likely unsuccessfully, to describe what it's like riding in the city to those I met in my travels. I take my gloves off at the tollbooth, tunnel in view before me, and hand my five bucks to the attendant. I am shaking with excitement and anticipation. I consider the significance of this finale. The attendant sees me shaking and says "Relax honey, take your time. They just cars and they can wait." I feel welcome.

I slide through the city to my lair in Brooklyn effortlessly, in only minutes.

I pull my bike into the shop, set my helmet and gloves upon the bench as if I'd just come in from an afternoon ride. 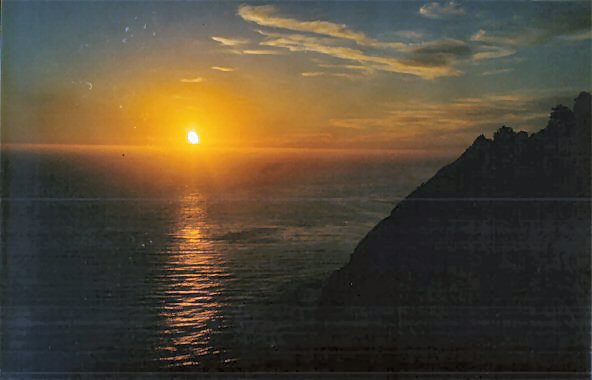