Here are some pics of some of the folks I got to hang out with in Milwaukee. 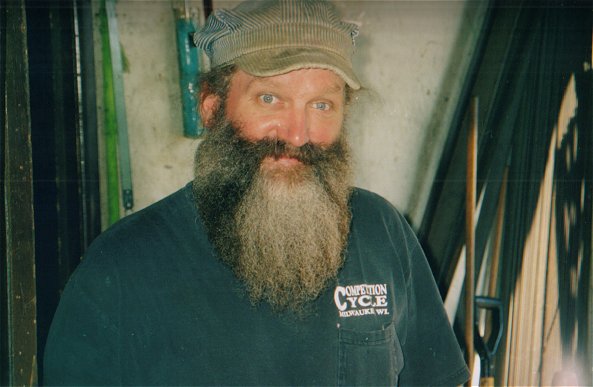 Charlie - This man took all morning off from his busy independent shop (Competition Cycle), just a few days before the anniversary insanity, to repair my broken frame so I could continue my trip. I didn't mention it before, but this trip was almost over before it got started. It broke at the casting behind the clutch hub this time. Charlie spent hours expertly fixing the frame and would not take more than forty bucks no matter how hard I tried. I begged him to take more. I want skilled nice guys like this around when I need 'em. I sent him a postcard of thanks further down the road. He and his wife Sue ride a pair of old, unrestored VLs around town with their dog in the sidecar. 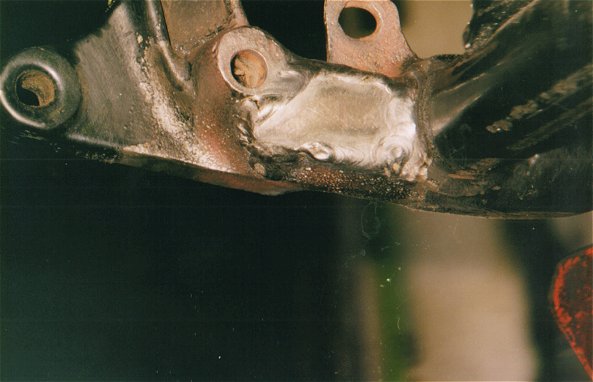 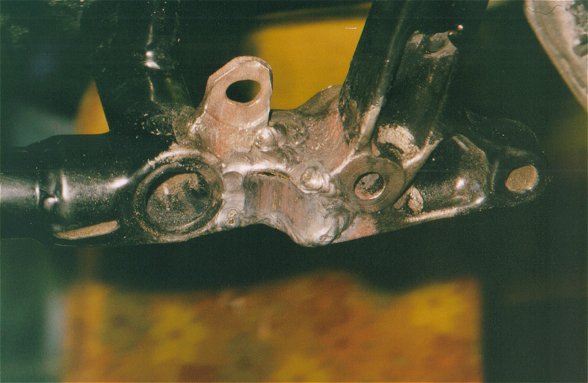 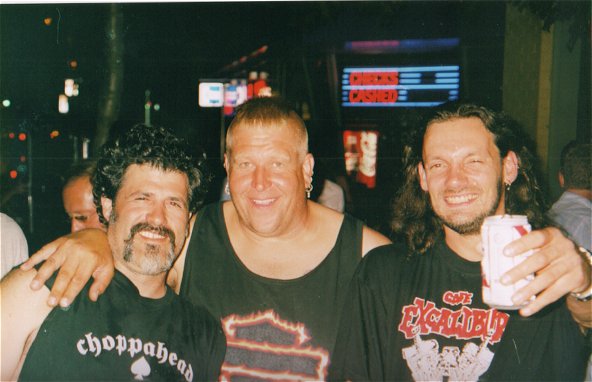 Dave (far left) - (y'all know him here as Spanner) Top notch fella and generous as they come. He offered to put me up for the duration of my visit. He also put up a few German (I believe they were German) friends (almost spelled "fiends" by mistake, although it wouldn't have been much of a mistake) at his place. Hell, I think he even put up Big Truth. Thanks Dave. Oh yeah, his wife and kids are pretty damned excellent too. 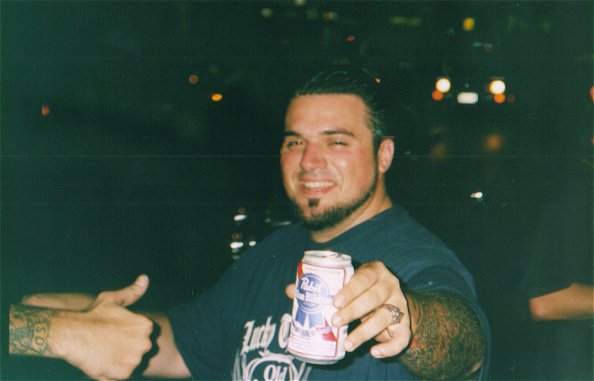 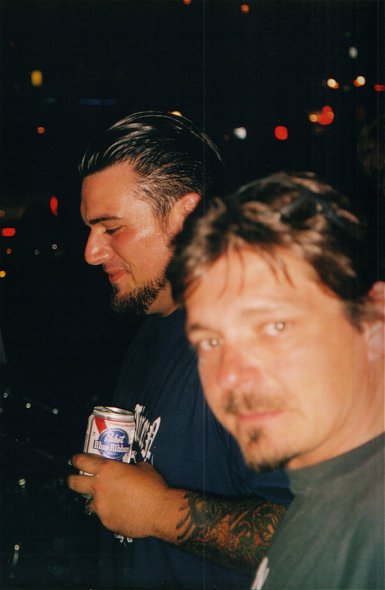 Truth - Sick mofo and a cool guy to boot. He made me right at home by telling me that it was nice to hang out with "another East Coast asshole" in the land of custard stands, PBR, and meaty girls. (I'm not knockin' thickness by any means. Hell no.) Hopefully I'll get up to Boston sometime soon to check his world out. Nice to meet you Truth. 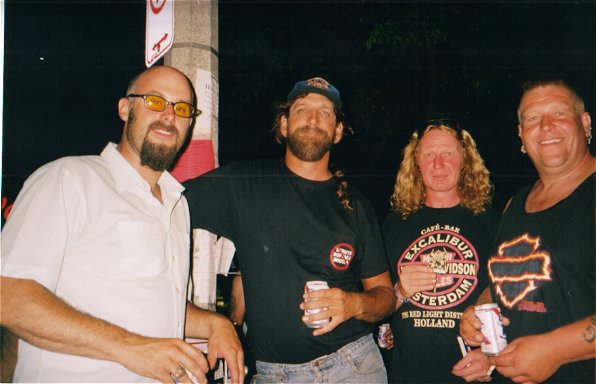 Mole-man (aka The Womb Stretcher) - (second from left) turned me on to some great roads and places to check out on my way West. He was right about all of them. Every once in a while his other nickname would pop into my head out of nowhere and crack me the fuck up. A faithful proponent of the KGB. Magnet for hotties everywhere (wish I had his secret). 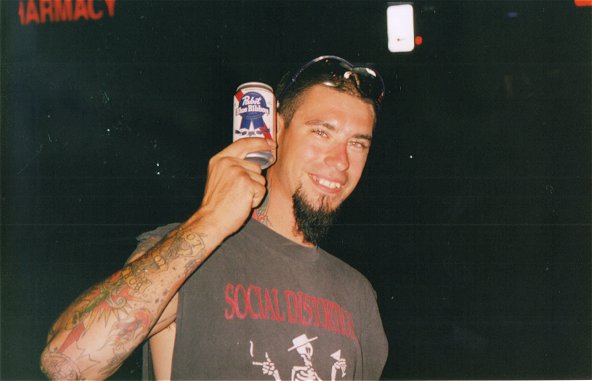 Trevor - this guy was cool as hell and is also the owner of the all black jap chop I posted earlier. Considering I remembered over what seems like a hundred of the hundred and some people I met on this trip I'm not doing too bad. Anyone know this guy and want to tell me his name? 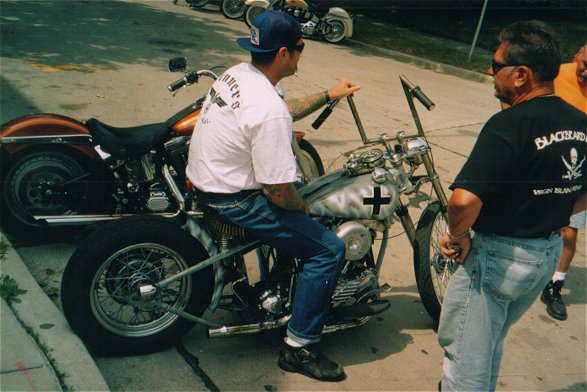 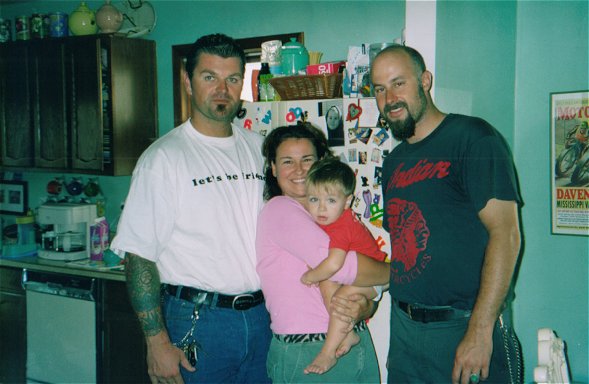 Tommy Gunz - Through one of those small-world coincidences I met Tommy and his Milwaukee buddies a few years ago at SMSO. As we were leaving I asked him for his e-mail address. When I saw his last name I realized his sister was a friend of my ex-girlfriend (seven years, still friends). His was blown away when I said "Oh, I know your sister Maggie". He almost fainted. Tommy has a beautiful wife, Janie, and an incredible son Vince. He welcomed me into his town and amongst his friends as if I were royalty. Thanks Tommy if you read this. 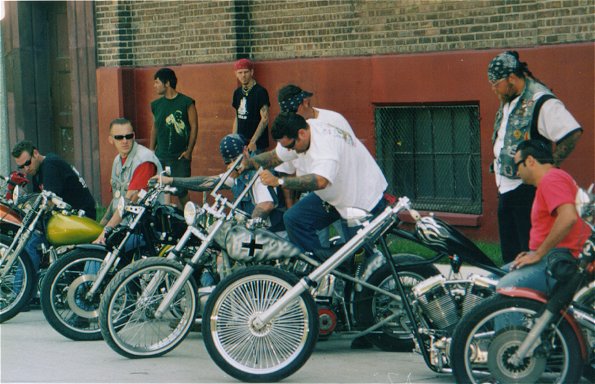 Onalaska Mike (vest & doo-rag) - Mike is the ambassador, if not the Pope, of Milwaukee. You can find him in the center of cool bikes, cool people, cool situations, wherever you go. He kindly put me up at his place for an entire week and gave me full run of the place. Mike is the kind of person who'd share his last dollar with you. I found him up REAL early on the day I was to leave marking great roads and destinations on a road atlas of the country that he gave me. God damned! Thanks Mike.

Since I'd have to write a few hundred pages just to give a flavor of all that I did in Milwaukee and all the great people that I met, I'll cut this short. Thanks to everyone I met there and know that you're always welcome at my place in Brooklyn. We'll show you a good time.