From Nashville to Philly. . .

So after a few weeks of deliberating over whether to buy the cool old truck or not, I decided to "invest in my pleasure", as a friend so succinctly put it. Delivered in earnest, despite possible potential other interpretations more like "first time freebies from the dope man" or "it'll make you feel good". Uneventful flight, despite being packed between two large folks on the plane. Finished Master & Margarita, and thought about it for a while, until we touched down.

Sean was there to meet me at the gate. Not the old way when non-inspected regular folks and family were allowed to receive the weary with smiles and hugs and open arms. More like behind the cordon as the prisoners are released.

We spent the night servicing a time-warp. . . a motor that I built three years ago that was just getting around to firing stage. I could hardly remember details and it seems I made a few mistakes. They were easily remedied though, despite having to revert to shade-tree ways for absence of the proper tools. We were determined to fire it for the first time before calling it an evening. It's not every day I find myself in Nashville, and I'd been wanting to see this through to completion for a long time.

Before going to bed, I spied the truck for the first time (except for the pictures I'd carried in my back pocket for the last few weeks). I was a little nervous from the many disclaimers and warnings Sean had made as he shuttled me directly from the airport to his friend Jason's house to get busy on his bike. A little weird, I must say, to have gone all that way and not gotten to see that which brought me. A patience test perhaps? It was more beautiful than pictures had conveyed. It was in much finer condition than the warnings would have me believe. Tough to sleep in the secret lair above the garage until I finally admitted defeat at 6:30am. Sean is one of those early morning, always moving, freak cases. . . so I figured he'd already been up for an hour calculating and waiting on when he might successfully roust me.

We took the first ride that morning to get some coffee and an egg sandwich. So peaceful was the barren-road ride from his house to the breakfast joint. A raw machine, no doubt. He rode it there. I rode it back. Fair I guess. Once home, he packed me a up a roadside tool kit and we took care of the paper particulars. . . check, reg, title. I know how it feels to have old machines leave you. And it can be tough. Most folks don't realize the emotional (and monetary) investment in bringing old metal from the past to serve in the present. It's no wise move if your aim is to someday get your money back. It really is like the cliche. . . sweat, blood, knuckles. It's worth it when you intend to keep and enjoy what you built. Parting is another story.

A few pictures later and I was on the road. Three gears. Big old fenders. More noise than a jet plane taking off. Good thing I brought ear plugs. Since there's no gas guage, or any other guages for that matter, I filled up, marked the time, and set about figuring just how far I could get on each tank, on each gallon. Following mile markers, watching the clock on my phone, and listening for a constant engine note, I calculated that I was travelling at exactly 60mph. At the first gas stop I figured that I was getting 16mpg, better than my damned regular car. For whatever reason, I managed (through no effort, strictly accidentally) to keep this pace, to the minute, for the first 400 miles. I stopped watching so closely thereafter as there was no need letting me wander into daydream zone.

I got more and more settled in as the day went on. It was tough to get comfortable as there is hardly any leg room and the seat is pretty collapsed at the far left of the cab. Additionally, the steering wheel is only about 12" across and comes within inches of my chest. So I fidgeted and squirmed and shifted for a few hours slowly finding the short list of positions that were bearable. My left knee is bruised in a few spots where it was rubbing and banging against the ridge in the interior door trim. My left forearm has a crease/bruise where it was resting against the window pillar as the bumps came and went. My back was a bit hunched after each leg ride and I'd get to hobbling around at each gas stop.

Don't be mislead. Despite the aforementioned bitches, I was smiling my ass off the whole time. The truck is so fucking cool, so dripping with style and character, that it'd take an lifelong ascetic (and a disciplined one) to resist it's rough charms. The motor roared (no joke) the whole time and the stereo was blaring as I made my way through Tennesseee, up through Kentucky, across West Virginia, into western Maryland, and up through Pennsylvania to my home in Philadelphia. Everywhere I went people were waving and staring and giving thumbs up. I waved and smiled at all the kids who got starry-eyed with amazement as they went past. Some giggled. Some waved back. Some ducked down in their seats and peeked up to see if I was still there. I remember being on the other end of this thing when I was little. I can still picture clearly the first shovelhead (at the time, I only knew that it was a Harley) I ever saw. . . heading south on I-95 towards Delaware with that big primary case hanging off on the left, just inches from the ground, with the scripted numbers 1-2-0-0 on the front fender and low slow bleat of what seemed to be a tractor engine.

I had a lot of time to think on this trip. About past travels and people. About my life with Megan. About things we might do in the future. I pictured us driving together with her next to me and the dog hanging her head out the window with the wind in her face. I imagined my kids someday riding in it with me on Sunday mornings around town with big smiles. I imagined my grandkids looking at it with amazement someday long after anyone remembers what one of these looked like.

I wondered how I became so addicted to travelling by roadway, since I was a teenager. I suppose the initial freedoms it offered, seeming wild and new to a poor kid with nothing but a bicycle, left an indelible mark. From $200 illegal junkers, to shady N. Philly car lot bombs, to old beaters literally falling off the frame . . . I've made my way around pretty well. Often with fear of the unknown. Often with no money in my pocket. Long before cell phones were around. Long before I was smart enough to carry tools. Before I knew how to keep old machines alive. Before I had the wisdom to let go and let the ride take me where it may. That is the difference: I'm no longer fearful of being stranded on the side of the road, of running out of money, of getting arrested.

Funny how I need to keep proving it. How I like to. How I do.

We found each other. Let the story continue. Don't question how.

Leaving Johnny Gringo's in Nashville at 8am. 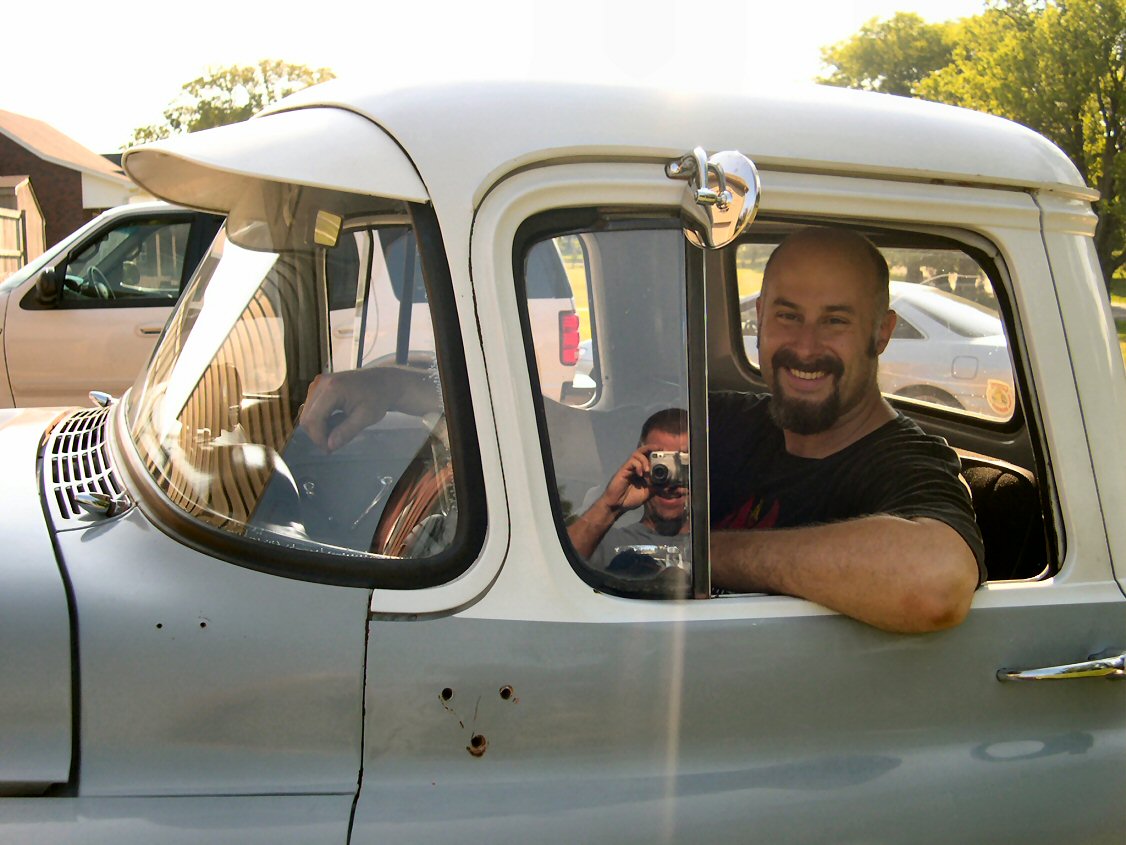 At a gas stop in Kentucky. Apparently, they sell cold beer. Unfortunately, I was too busy to test their claim. 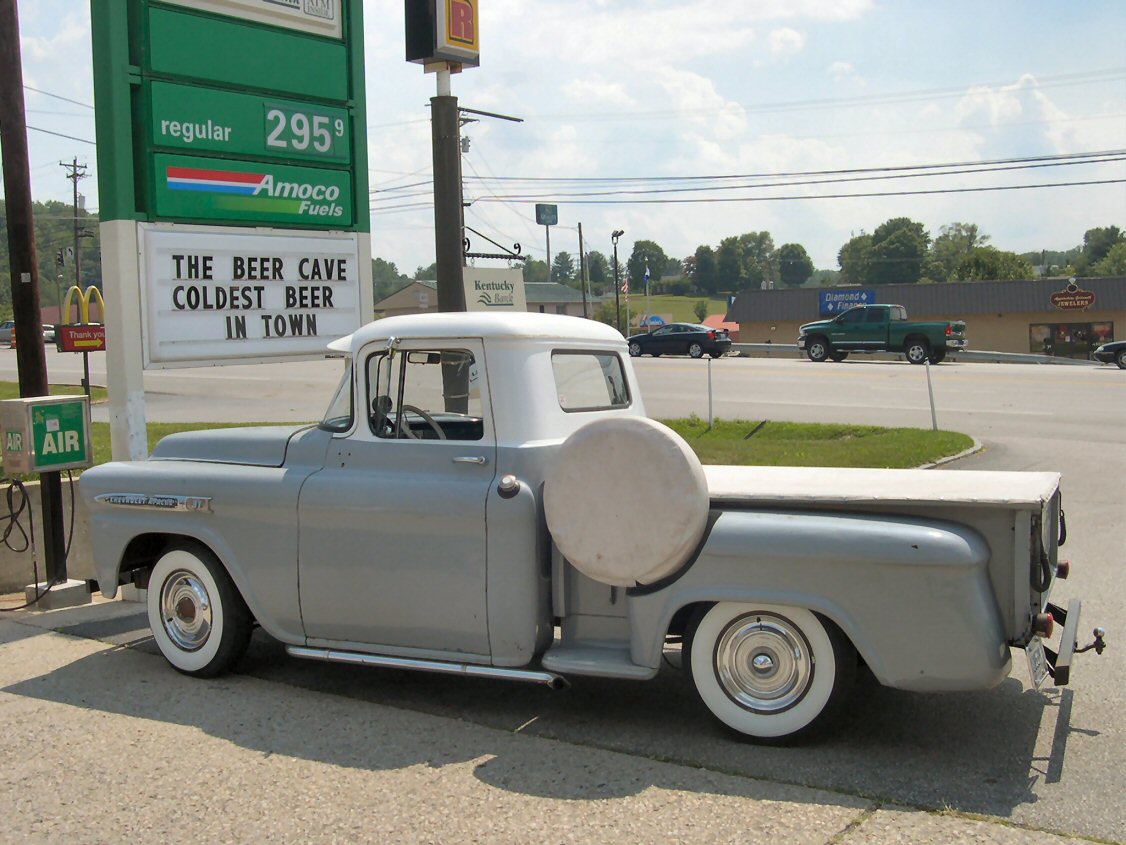 On the road, mid-afternoon. 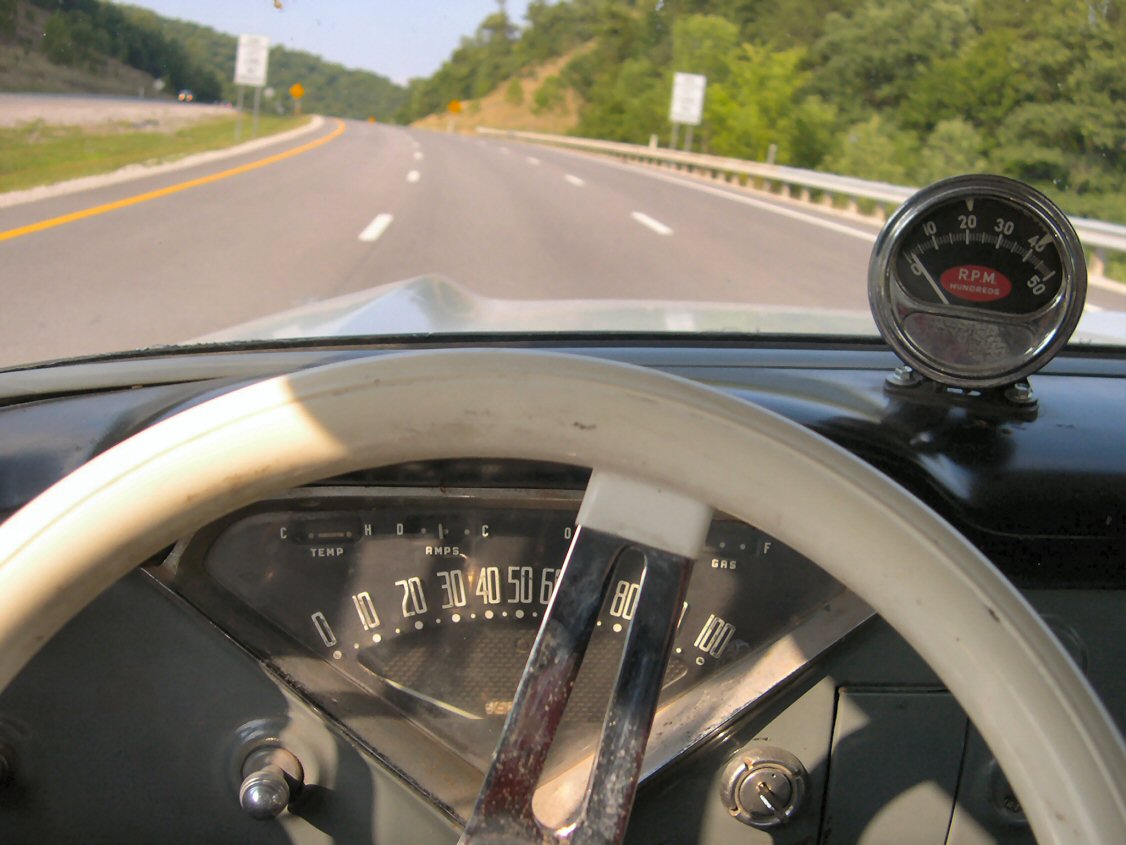 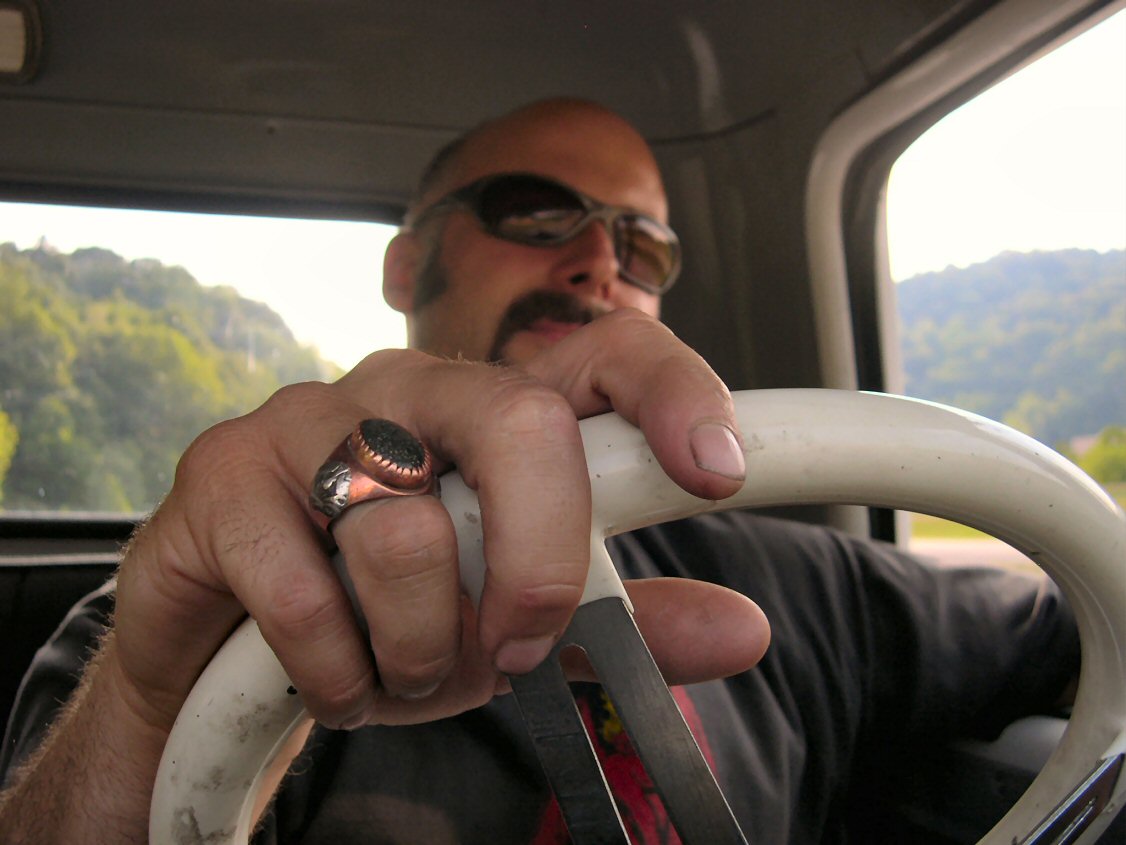 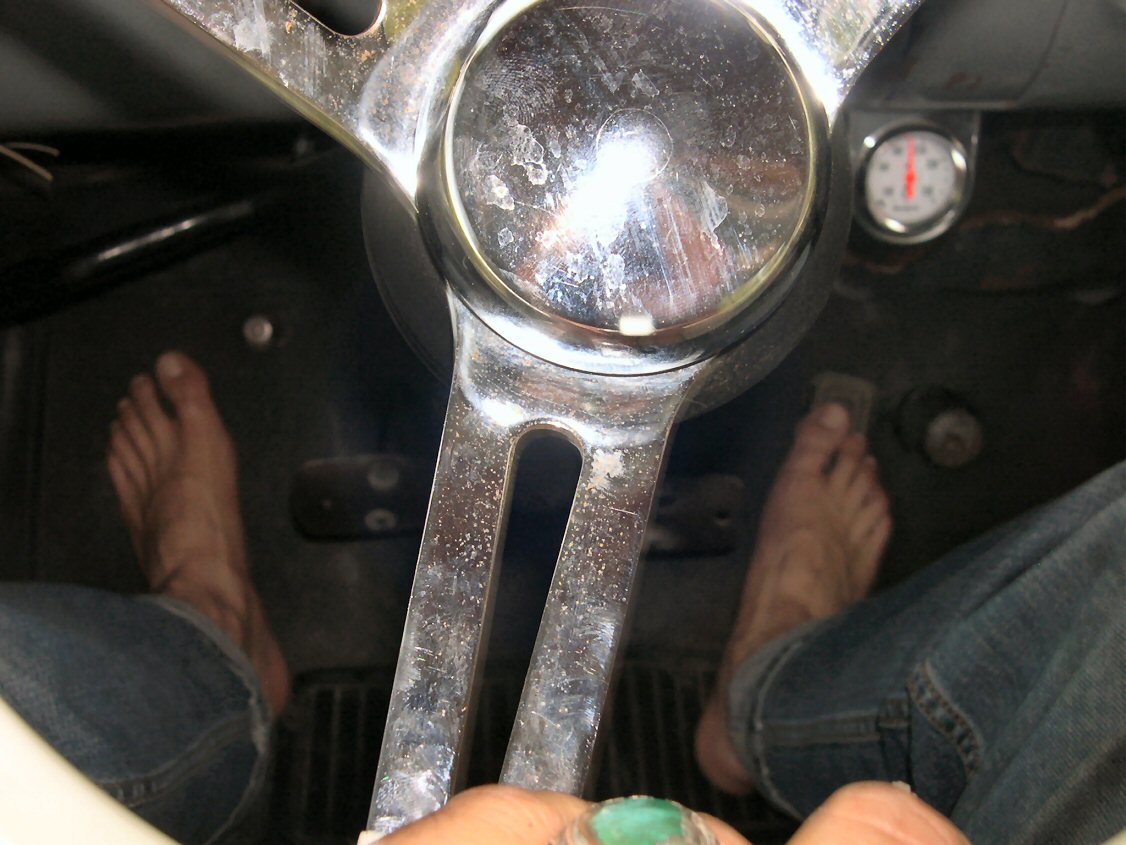 The first thing I did when I got home was fetch up the hound and take her for a ride. 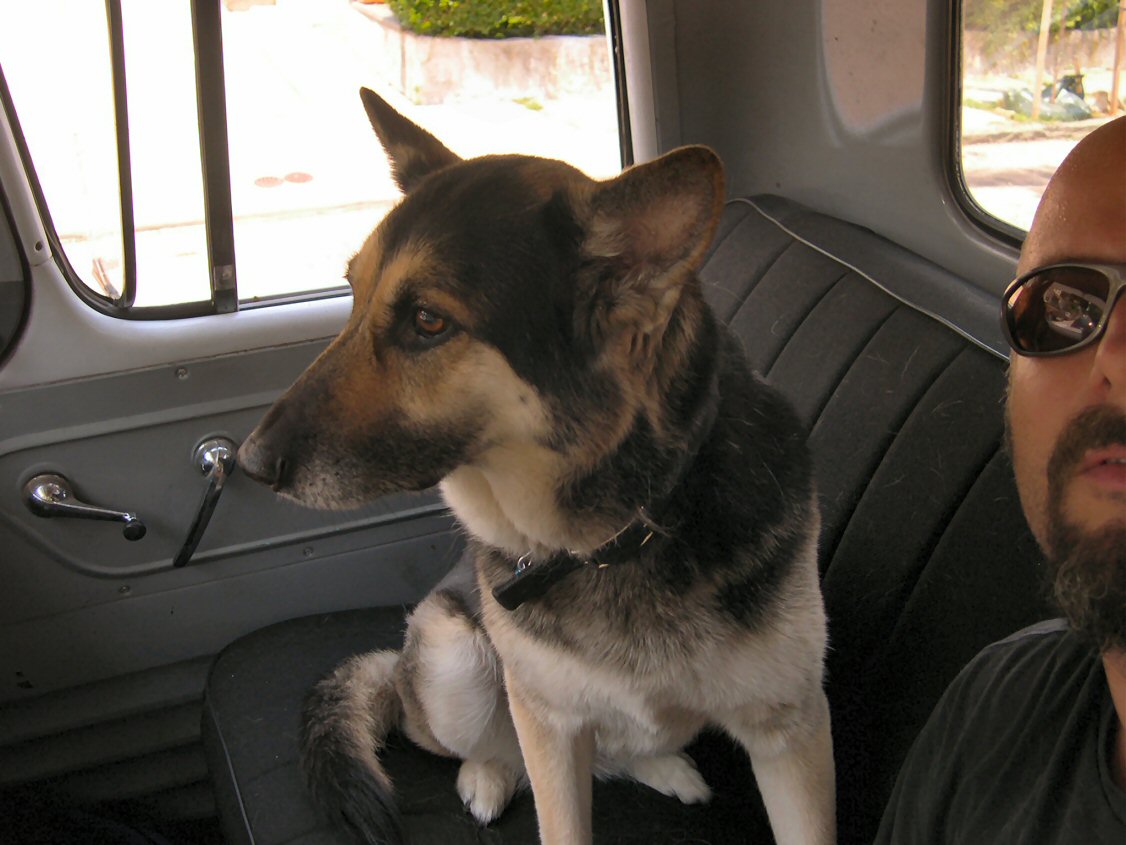 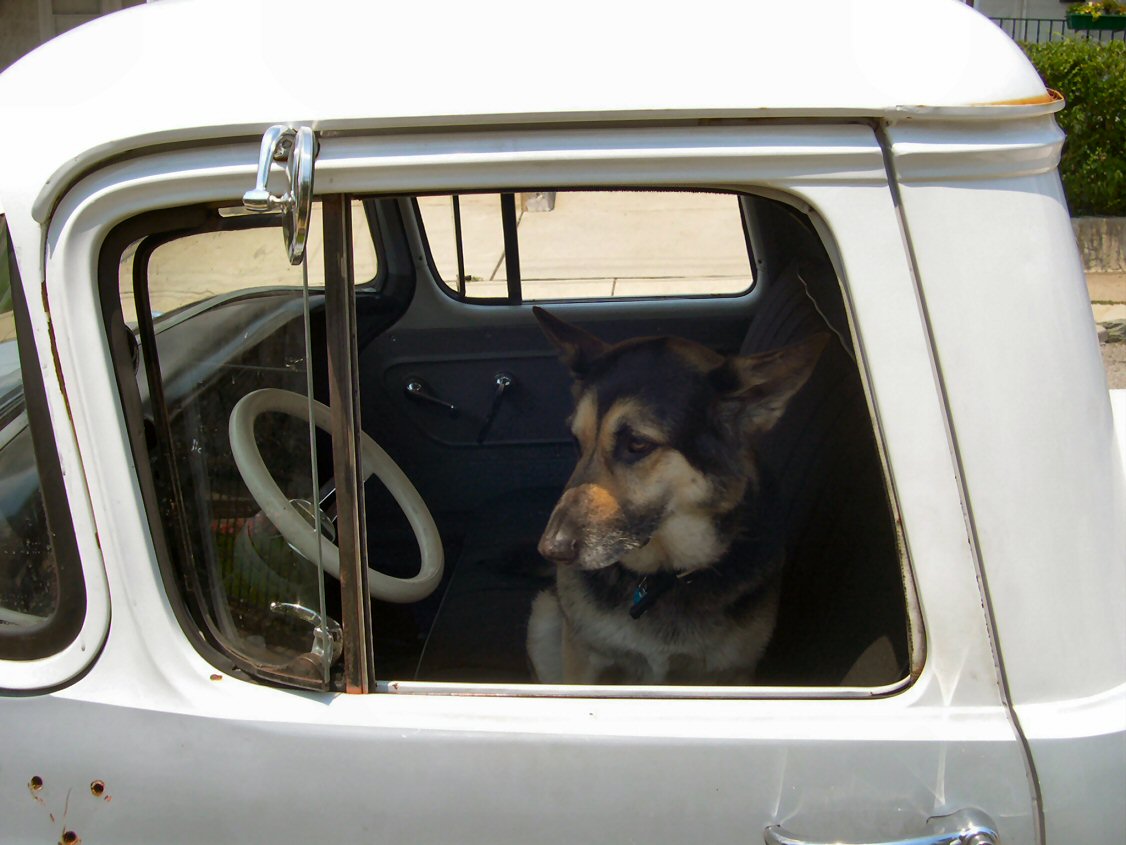 Later that day, Megan and I drove downtown for Mexican dinner and to see some friends. We parked by the Ben Franklin bridge so we could send "proof" pictures to Johnny Gringo that she's a Philly truck now. 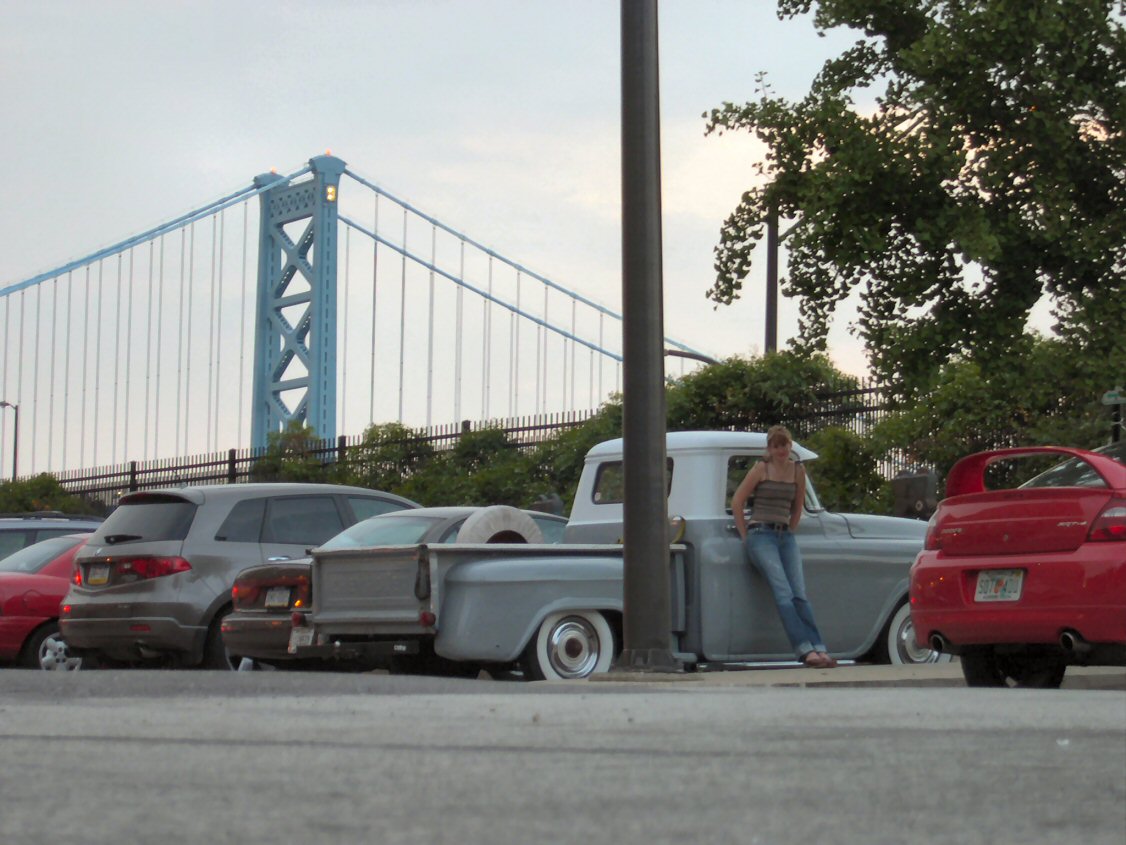 Then we headed over to Ben Franklin parkway in front of the art museum. We pulled right up on the sidewalk at the fountain for pictures and a swim! 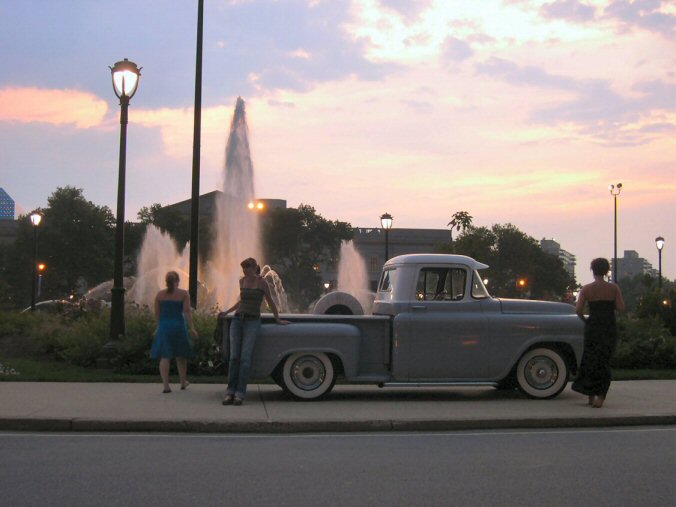 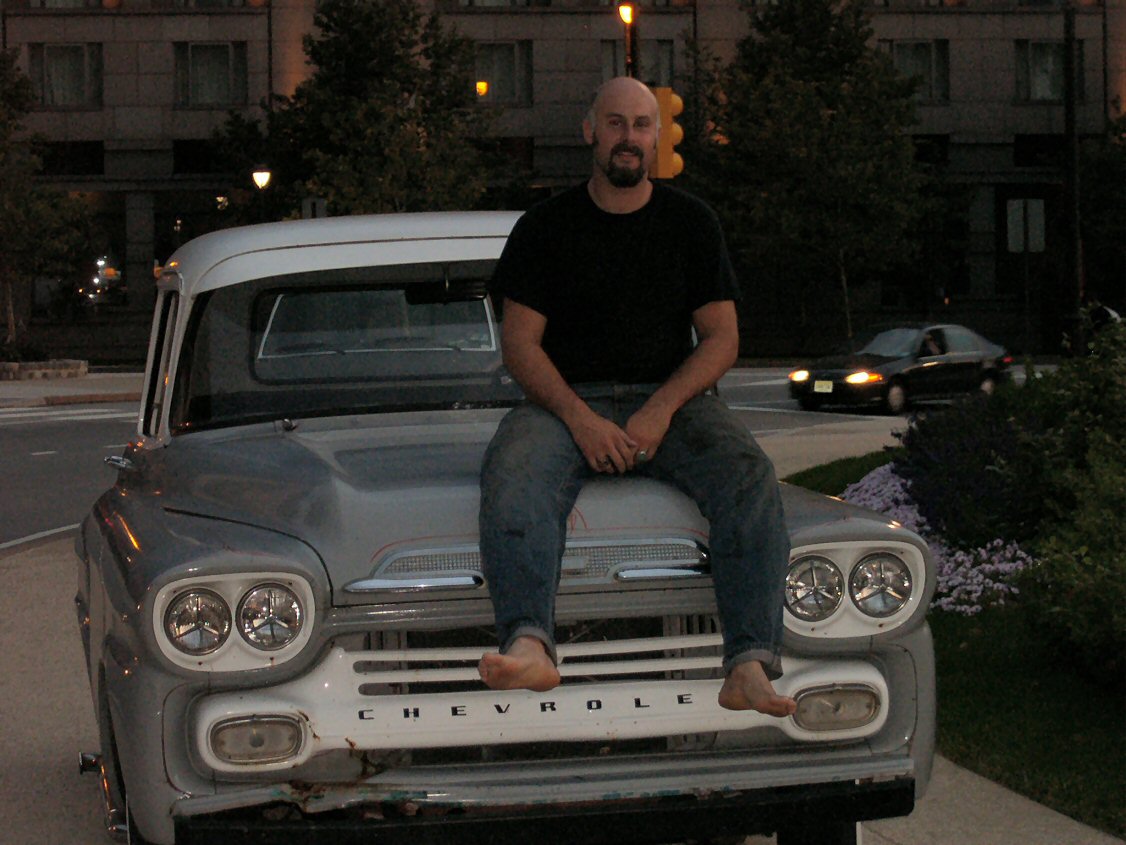 The fountain was a great way to end a hot day. There were children swimming and playing, water spouting everywhere. 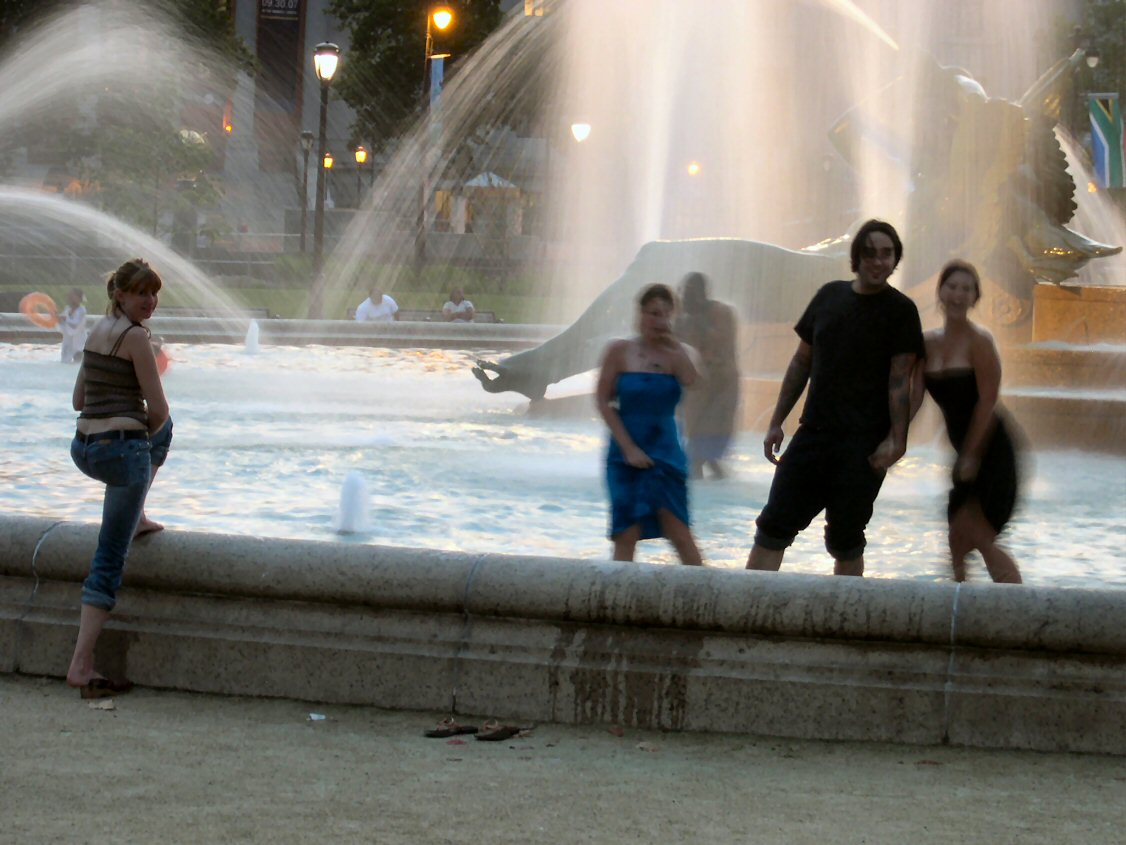 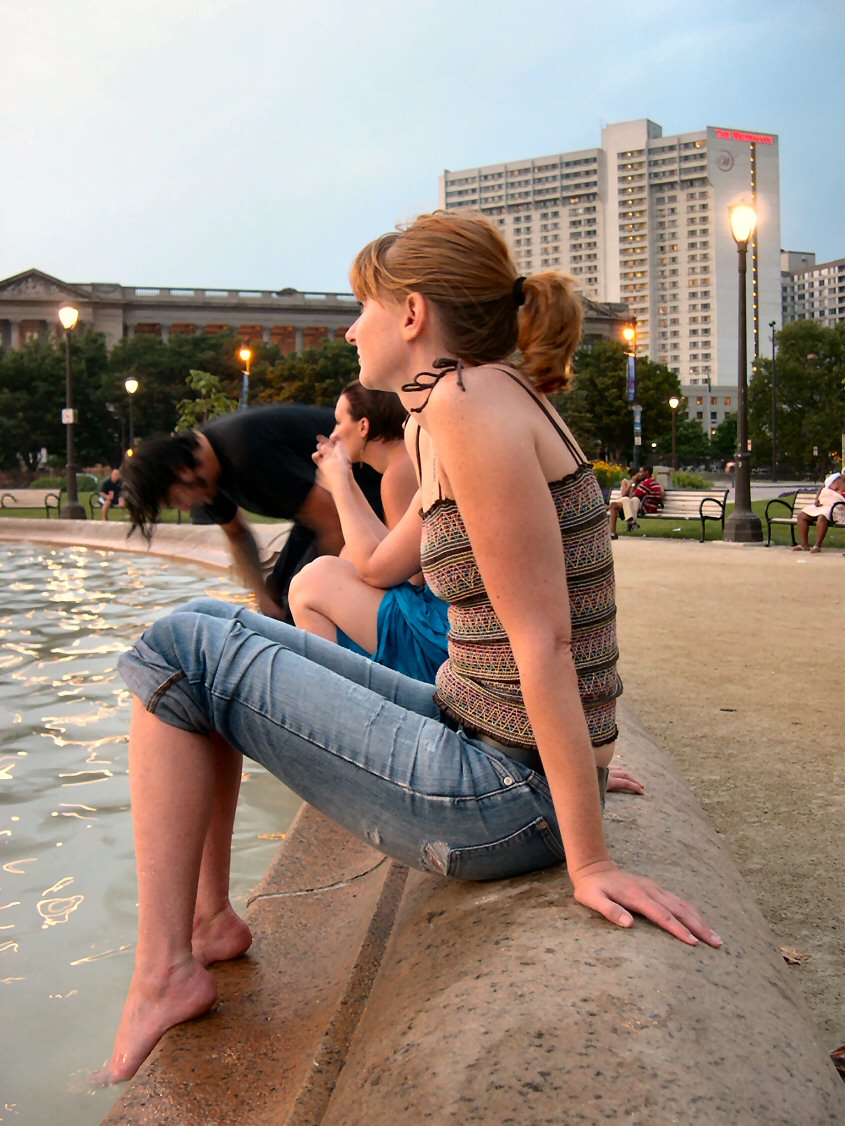 This city has so many nice parks and flowers and woods. It's like living in the country sometimes. 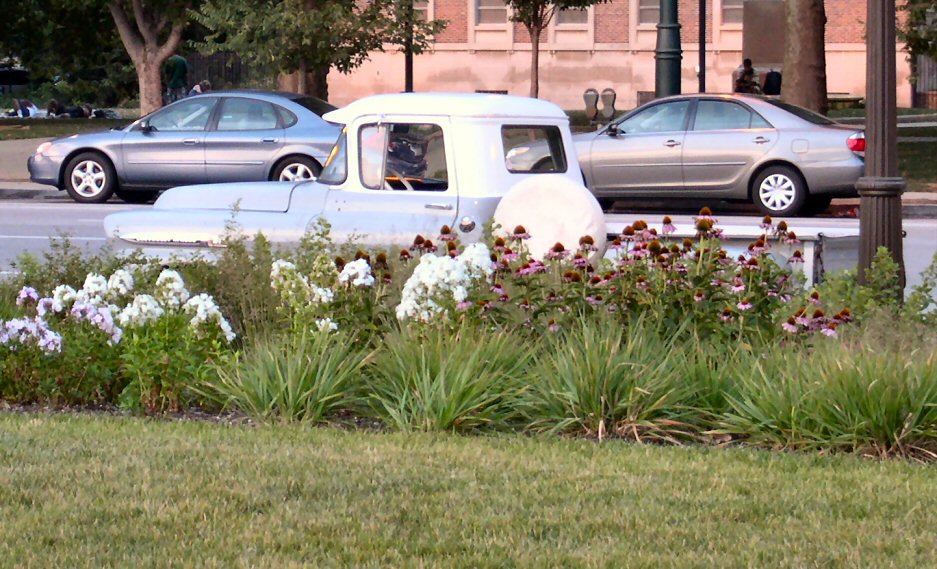